Dead by Daylight is an asymmetrical multiplayer horror game where one player takes on the role of a brutal Killer and the other four. As a Killer, your goal is to sacrifice as many Survivors as possible. As a Survivor, your goal is to escape and avoid being caught and killed.

I have logged 300+ hours in the game within the past year, but as a devoted designer and player have set out to envision a better user experience.
‍
Dead by Daylight is developed by Behaviour Interactive. I do not own the rights to this game.
‍

The developers of Dead by Daylight have struggled to meet the needs of their player market—such as, imbalanced matchmaking, an unreliable reporting system, and more—making it difficult for the players to properly experience the game.

A Dead by Daylight redesign that focuses on more equitable and intuitive matchmaking, as well as more comprehensive game analytics for the players to enjoy and comprehend their gameplay.

Although the responses within the Dead by Daylight community were limited, understanding the game’s market and their pain points helped in the design process. Additionally, playing the game has added to the project by being a source of passion and personal interest to apply my design skills.

“A reporting system that actually does something. When reporting toxic gameplay, it rarely gets elevated to banning someone, especially since there's no proof attached.”

“Balance is a very subjective topic when it comes to this game. My view of the game is probably way different than others. It's subjective, and it changes based on the experience you have in the game”

"Dead by Daylight is ran by a developer that understands, knows, and exploits the fact that there is no other game like it. It’s made the devs complacent. They do the bare minimum with updates, and make this game hard to enjoy for a lot of people.”

"Matchmaking will always not be perfect especially going the MMR route. With MMR, the player's cumulative match skills are accounted for, as opposed to just the rank number. There's always room for error with a game that has thousands and thousands of players.

"For me it's matchmaking. Doesn't matter what else happens with the game - if you put newbies in with multiple-thousand-hour streamers, the game will be difficult to enjoy."

"Balanced perks don't matter if someone has ten times your experience."

"Some killers are too weak compared to the others (Trapper, Pig, Legion). There needs to be more of a balance across their perks and abilities."

“The game lacks balance in different areas, it’s difficult to even out with a game as complex as Dead by Daylight. Addons, maps, perks, and everything in between all weigh into the game and how it can play out. I think part of it is sorta embracing part of the imbalance, and working around it.” 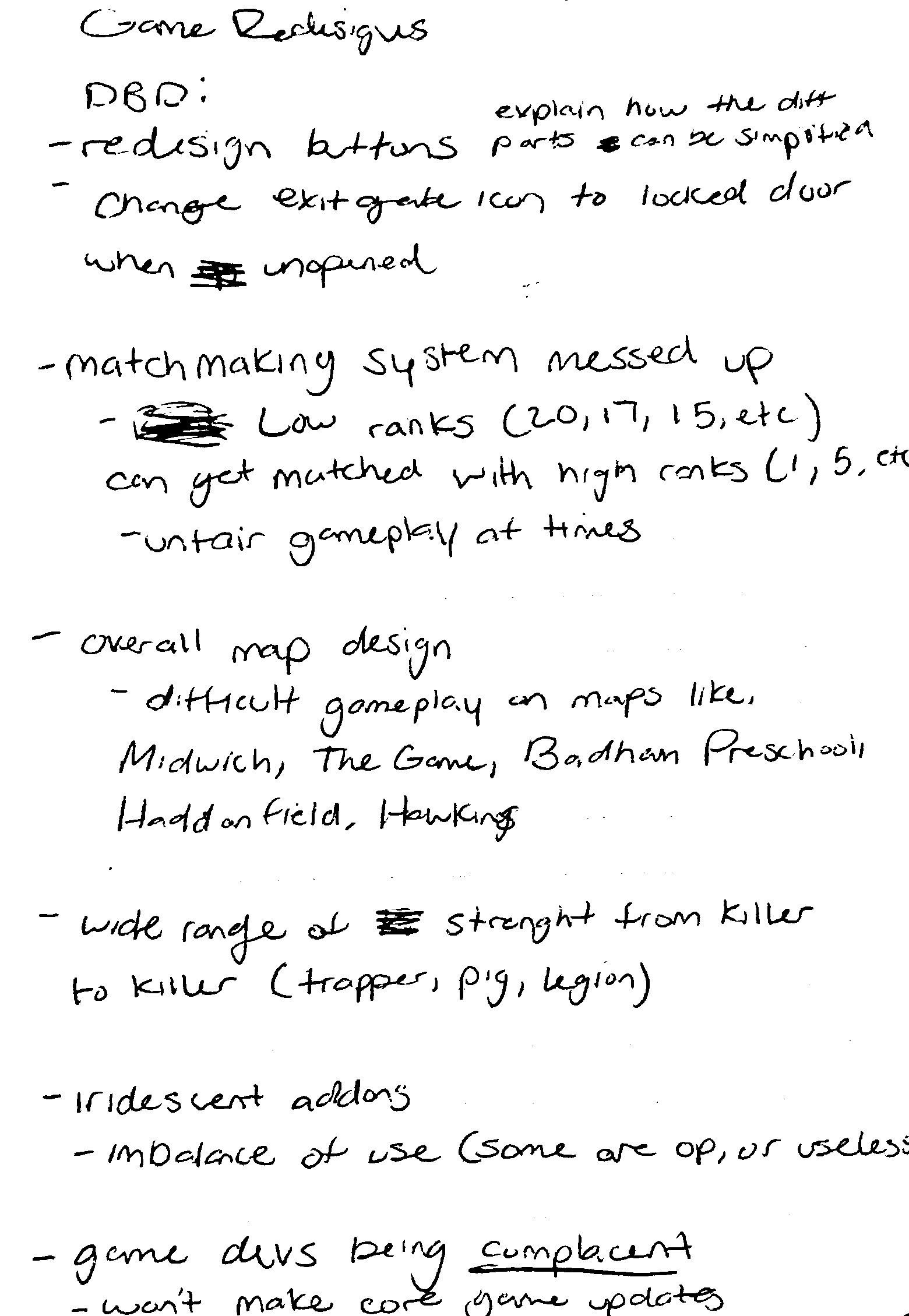 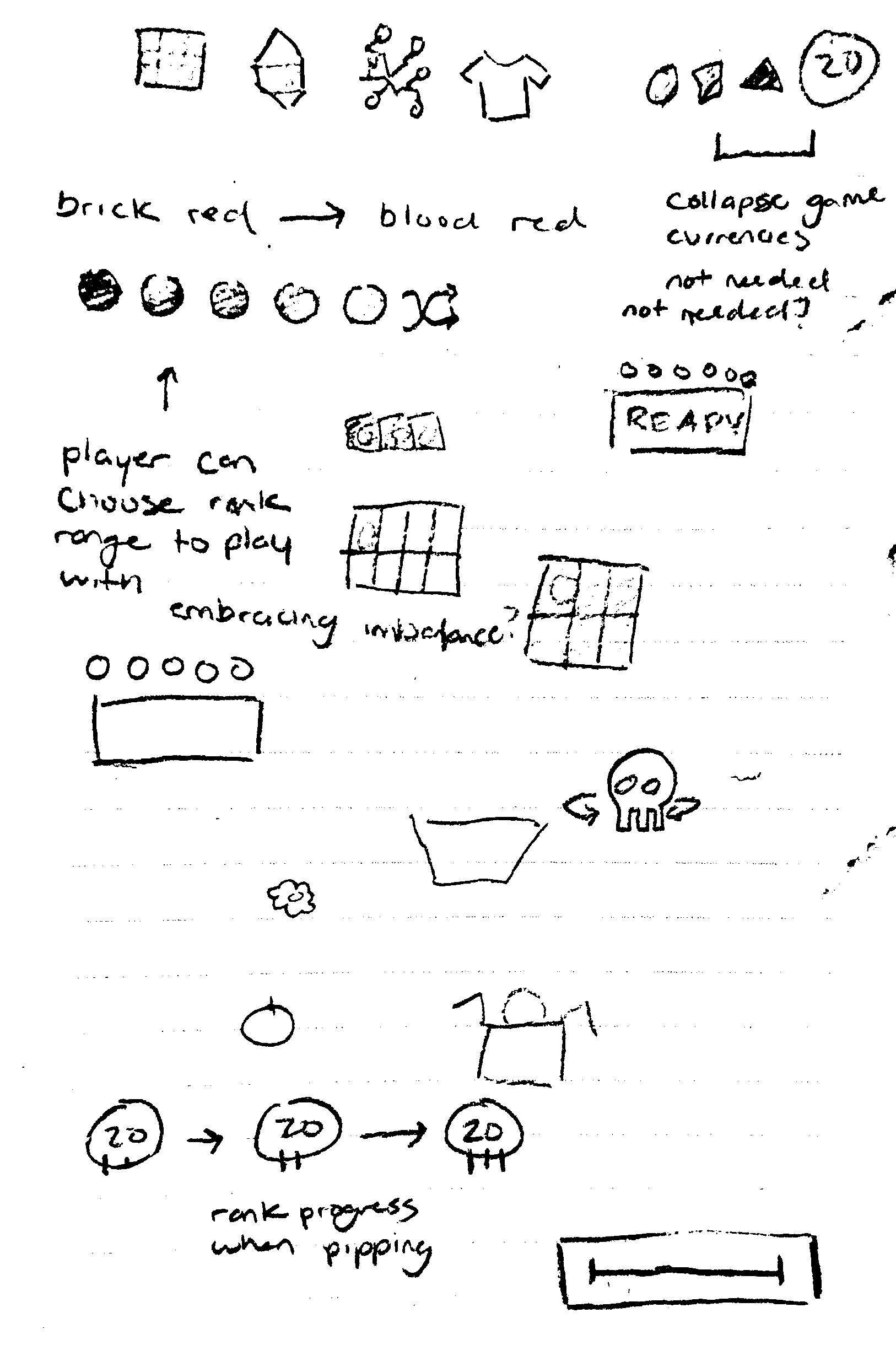 Pivots in the design process
Learning from research

After the preliminary stages of research through Reddit and Discord, it became clear that players were most frustrated with core features within the game. This included the overall imbalance of the game, the reporting system, matchmaking, map design, and much more. Tackling each problem wasn’t possible, even with my lack of game design/development background. Matchmaking and the reporting system became the new focus for the redesign.
‍
Later in the design process, the gameplay analytics feature was added to enhance the player’s overall gaming experience with Dead by Daylight. Additionally, this was an area the pre-existing report system could live, and the player could report instances through replay footage. The player would be able to have various submissions options: reporting toxic gameplay, suggestions for perk changes, and more. Taking inspiration from the clips feature from Twitch allowed for a more intuitive submission design.

design changes
Focusing on the design

From minor to major changes, below is an example of different UI elements created with the redesign—this showcases the design process through using various UI and UX tools. Collaborating with an illustrator can help in making these revisions more on brand with Dead by Daylight.

Customize
The player can customize their character with various cosmetics. At first glance, this may seem like a profile—a t-shirt icon allows for a more straight-forward userflow for reaching cosmetics.

Store
The player can visit the store and purchase various perks, cosmetics, and more. For unity purposes, this icon was changed to be more streamline with the rest of the game's flat and outlined button style.

Daily Rituals
The player can view and later complete daily challenges within the game. A candle can be confusing for players—a clock icon symbolizes time more efficiently.

Switch Character
The player can select each arrow to alternate which character they play within the game. Moving the character and their level, along with an information option, allows for a more balanced and intuitive appearance for switching characters.

In-Game Currencies
The player is able to view the quantity of various in-game currencies they're able to use within the game. The most used currency are bloodpoints, the red icon on the right, which can be used for upgrading a character's level. The other 2 icons are only used within the store. With the numbers being collapsed, the player is able to hover over each icon to view the respective currency—allowing for a more clean design.

From this design experience, I’ve realized how challenging the science of game design can be, especially with Dead by Daylight—it encompasses many intricate aspects within user-centered design combined with gaming. To design a successful game, there’s no proper guideline.
‍
Although the research participants within the Dead by Daylight community were limited, understanding the game’s market helped in the design process. Initially, there was a multitude of gameplay issues the players were expressing. However, after further analysis, and using my experience with the game, I understood the most critical issues to fix with my resources.

Here are some other projects!
Stardew Valley
UX/UI Game Design
Gaming
Redesign
A Stardew Valley redesign that focuses on more balanced and intuitive core features, as well as accessible gameplay mechanics for the players to further enjoy their gaming experience.
OpenStudio
UX/UI Design
Art Community
VR Experience
An art community application and 360° virtual reality experience that enables artists to share their studios, stories and creative processes to the art community.